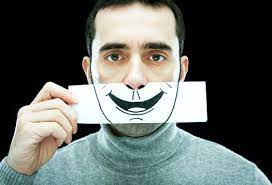 As I right this it is mental health week, everywhere you look on social media there is advice about what to do and where to go to get help when you are not feeling on top of things, but what if you don’t know you need help, what then?  This article is a little raw, I’m not going to apologise for that as it is what it is, in my 51st year of life, I did not know I had a problem, I had no idea that from a mental perspective I still had a lot of healing to do.  I am writing this article to raise the awareness to emphasise that if you think you need help, you probably do, but if other people think you need help, you probably do and here is why I say this.  If you haven’t already, grab yourself a coffee and read on, this story will be split into 2 articles due to its length.

It is often the ones closest to us that we hurt the most, yet we don’t lie in bed as the alarm goes off and say to ourselves “I think I am going to make my partners life a misery today”, consciously we can’t think like that because that is an action that will lower our status in the (family) tribe and our brain will not let us do this.  So something else must be going on that allows us to not behave appropriately, be inconsiderate, rude or even violent to those we love.  At this point I will say I have never been physically violent but have I been psychologically aggressive, yes and often, long before I knew this was a thing, did I do it consciously, no, but every time I felt judged I got defensive, in my defensive state I often became verbally aggressive and I had no control over this in that moment.  It always happened in the spur of the moment which always left me feeling awful afterwards.  I have always behaved this way, I never saw anything wrong in what I was doing at the time, I blamed others for always being judgmental towards me.

My awakening (as I describe it) started about 6 years ago when a business partnership fell over, it put a huge strain on myself and my wife at the time.  There was nothing my wife could say to me that didn’t put me in a defensive position, meaning, it got to the point she stopped trying to talk to me because it was just too hard for her.  Needless to say we went to counselling and there I realised just how damaging the trauma I had experienced as a child was on my adult relationships.  This was the start of my healing journey, the problem was that the counselling gave me strategies to help us avoid triggering each other so we could have those conversations but it never really got to the bottom of my trauma.  It scratched the surface with the instances I remembered, but what I discovered this year, there was a suppressed eight and 15 year old inside of me, still hurting and although my mind had buried those deep (I was previously completely unaware of them), my body certainly was keeping the score!

You see over the past 2-3 years I had been practicing things like meditation, looking after my energetic bodies, looking after my physical body (I lost 15kgs) and generally working towards holding a state of peace as often as possible.  As I was progressing on this journey I became more aware of what was going on in my body, for instance when I am under extreme financial pressure it manifests itself with pain in my lower back and hips, if I have up and coming social engagements that I dread going to, I get itchy shins and then there is this knotted stomach, its always there, I realised this year that I have lived with this all my life and I can only liken it to a simmering rage.  It was ever present, sitting in the back ground, I had learned (most of the time) to keep it suppressed but every so often it would get the better of me.  Up until this point, I still thought there was nothing wrong with me, I thought everyone lived with this.

Then a few months ago I was introduced by chance (if there is such a thing) to Rico, he has a company called NeuroFit, the person that introduced us thought we would get on like a house on fire because we both study in similar fields, I use the information to develop psychological safety in the workplace, and Rico uses it to coach / counsel people back to great mental wellbeing.  During our conversation we somehow got on to schooling, and I made a brief reference to my primary schooling and immediately emotion choked my throat, I was aware enough to know that something there needed to be resolved so a week later I became Rico’s client.  It was this conversation that led me to the realisation that I had some deep wounds that needed healing, that it wasn’t normal to live with these emotional reactions, but at this point I had no idea how deep they would actually go.  I was about to come face to face with my eight your old self, part of the process Rico took me on brought up this scared little David who hit me with new memories of my time in class with a particularly cruel (in his opinion) teacher.  I do remember running away from school that year which included a police hunt and me eventually seeking refuge in an old farm cottage in the middle of nowhere, but I could never remember WHY I ran away, until now.

My eight year old self had suffered multiple instances of public humiliation with this teacher, hauled out of class and made to stand in an open plan areas where 60 other kids could see me being shouted at by her, my class mates would all be looking at him sniggering and to finish it all off she made him sit at a table on his own facing the wall away from the rest of the class.  That was to be his lot for 1.5 years.  Here was the scenes at the root of my dislike of judgement, my fear of being rejected and humiliated in front of my peers, as an adult that manifested itself as avoiding social gatherings at all costs and my inability to take any form of criticism and not see it as ridicule.  I had to come to terms with this, I had to sit with my 8 year old self and tell him everything would turn out right.  I remember holding my eight year old self in my mind and showed him his future family, showed him his future house, telling him that he would move to New Zealand and I then went for a walk to show him the environment that we lived it.  That process was really cathartic, I felt a level of peace I had never felt before and what I realised afterwards was not only was I reconciling with my eight year old self but I had just gone through an exercise of gratitude, one that made my present self aware of all the good things that were going on in my life.

Everything felt great, I thought I had done it, got to the bottom of my issues, but the very next morning my simmering rage came back, I had got closer but something much darker was about to be revealed, the source of this rage and one my mind had hidden from me for 35 years.  [Click here for part 2].

So I will finish with this question for the moment, has any of my journey connected with you so far?  Can you see yourself and some of your behaviours in my journey?  If the answer is yes to either or both of these questions there is a chance that you too have some healing to do.  Sit with that thought, think about the quality of the interactions you have with those closest to you, do those interactions make you happy and proud of who you are?