On the bus or under the bus?

Are your people on the bus, ready to grow with you, or are they ready to throw each other under the bus? Here’s why it’s impossible to drive your business forward without a unified language. 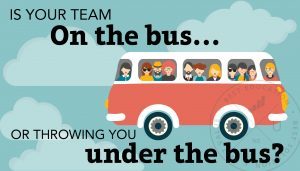 By changing just one word, the meaning of a subject can change dramatically. We hear time and time again about the importance of communication within a business, from ensuring tasks get performed correctly, to mission statements about company direction being communicated from the top down. Indeed, this is the area most business success coaches focus on when it comes to company growth and growing pains. But when things that are the foundations of a business, such as values and purpose, start being miscommunicated, then all the communication systems in the world aren’t going to help if everyone is speaking a completely different language.

What it means to speak a unified language in a company

There’s a reason we speak different languages. In the ages of the ‘clan’, you could tell where someone was from by the way they spoke. They have a different accent, and in many cases had developed their own words or meaning for words. This unified language happened historically for two reasons: To make internal communication easier within a clan; secondly, to make it harder for outsiders to infiltrate the ranks. This tight-knit collaboration was essential for the survival of the clan. The unified language was driven by the purpose of the clan, which was driven by that clan’s leader to ensure the clan didn’t just survive, they thrived! The hunters knew that the builders’ job was as important as their own, for if they brought home a kill and had no building with which to store it, the food would be exposed to the elements, wasting their hard-earned kill. We can equate this to businesses, where the sales team needs to know the production team are able to deliver on the sales that they have brought in.

But what happens when people within the same clan, who should be on the same team, start creating their own language?

Let’s first look at the why. What could cause a group of people to start their own inner circle, to the detriment of the rest of the business? The answer? Safety. The person, or group of people, are not being provided with a safe environment by the leader and as a result, create their own. And what drives a safe environment? A clear sense of purpose that is communicated through all aspects and positions of the business, that pulls the employees together for a single reason. Tied to this is the underlying values, that is how we conduct ourselves to reach that purpose, that drives behaviour and further unifies the staff as a team.

When the members of a business (or clan) stop speaking the same unified language, their sense of purpose and belonging gets lost in the day to day busyness of ‘getting the job done’. They stop seeing the other departments in the business as a peer and instead pull their own team, who still speaks a common language, as an outside threat. What happens when problems start to occur in the business? People start to lay blame on the other departments or people, further cementing their own internal language in order to protect their own department, and ultimately their job, pride or self-esteem. See, now we’re talking about ‘words’ because we no longer have the context to fall back on.

How to speak the same language and drive your business.

Some business owners I’ve talked to have a common frustration in their business. It’s one of feeling like a person or department is undermining their ability to grow the business. They tell me that if they could only sort out the office politics, bickering and internal rivalry then they could get on with the job at hand. These business owners have tried being the ‘boss’ and set down ultimatums and instilled competition to force the business along, despite the internal conflict. This can work for a short time with a spike in productivity but usually results in the long-term effect of further driving a wedge between the staff and even resulting in them leaving. What I help them to realise is that the people in their business are not setting out to disrupt the company, or to alienate staff members but it’s a case of unclear leadership.

When my clients have instead taken the position of leader – one who clearly communicates the values and purpose of the business on a daily basis, by living and breathing these same purposes and values, while in turn expecting that of their staff –these same staff members have replaced their own language with that of their leader. With the ‘problem makers’ perceived safety no longer in jeopardy, they can more clearly see the business as a single unit with a common purpose. They can see that their fellow ‘clansmen’ have roles that are in place to ensure the survival of the group and no longer operate as an individual, with them against the team, but see themselves on the same side using the company’s unified language.