Why your team keeps making the same mistakes 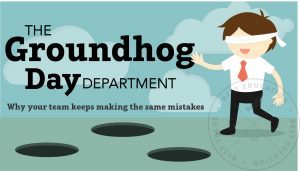 The frustrations of needing your team to go back and fix jobs can be morally and economically hamstringing your business or department, but if you’re writing this off as a necessary cost of business then you need to think again.

When you look at the reasons that people are making the same mistakes, then you can begin to develop a way of reducing and even eliminating these issues. You’ll also begin to understand that standing over your teams, or micromanaging them, are not going to be needed, freeing your time up to do your job while creating a more cohesive and happy workplace.

There are two reasons your team is making mistakes

One, the leader is not hands on. They’re not periodically checking and challenging their people before issues get big (or gets shipped to the customer!). I’m not talking about micromanaging, but about having a system in place to ensure it doesn’t happen again. This requires a tight team that trusts their leader. They understand that they are not looking for someone to blame but to figure out how to avoid the same scenario in the future and to have their back. They give them credit when they’re doing a great job and challenge them on how to do things better next time.

This approach requires a safe environment for the teams to do their jobs without fear. See my blog “Creating a united organisation through language” to see what I mean about an environment free from fear.

The second issue is that the staff or team have been left to figure things out for themselves. There is a huge difference between giving the team autonomy and just leaving them to it. The team needs to know the boundaries that they need to operate within. They need to understand the goals and meaning of what they’re doing and they need to be shown how the job is to be done. Productivity in an organization is not about teams having to figure out where the last team left off, but instead to be brought up to the level of the outgoing team or staff member so they know how it’s done. They can then improve that system where required. In turn, when they leave the position they can pass this knowledge like a torch to the next team.

You both ‘own’ their mistakes

There are many blogs about employees owning up to their mistakes and not lying about them, but there is a distinct lack of content around leaders taking responsibility for their employee’s errors.

In a company where staff feels safe to bring up issues and errors that they’ve made you’re more likely to reduce the need to go back and fix things and in turn reduce the number of issues in the future. This can only happen when the staff member or department know that they are not going to be punished (unless it is a criminal act or violates company values – which, if communicated to the employees consistently, shouldn’t happen) and that their leader is also going to take responsibility for their failure to provide the right system, tools or knowledge in the first place.

Are you stressing safety, or compromising safety with stress?

I’ve addressed psychological (fearful) safety, but there is a more obvious issue when I talk about ‘safety’, that is their physical safety. I don’t need to lecture you about having all the health and safety aspects covered. In fact, most often injury comes about from operator error. When humans are put under pressure, through fear of making a mistake, not meeting a deadline or from being pushed to perform, then even if health and safety procedures are in place your teams or staff are more likely to make mistakes. When you put your employees under consistent, repetitive stress, such as on a daily basis, then they are operating in the fight or flight survival mode. This is a chemical and hormonal response that has been in humans since our hunter gatherer times. It helps us to respond to a life-threatening situation by preparing the body to fight the danger or run from it. In order for your body to perform these feats, it needs to shut off parts of the brain (and body). You can learn more about these chemicals here.

Your teams may then be making errors repeatedly because a) they are in a stressed state as I’ve just mentioned, and b) they cannot retain anything that you teach them. When anyone operates in this fear state the ‘retaining information’ part of the brain is turned off – why would you need to learn anything if your brain thinks you’re about to die! We can’t learn in a fearful state because our brain just can’t catalogue and store the information.

I recommend that all leaders, no matter how many processes they have on place, don’t just review the procedures but look at the environment with which those procedures are being operated in, the happiness of the team and the ‘vibe’ that is happening with each department, starting with the ones that are making errors, but also those that have a spotless record. Even if they are both following the same procedure manual it will be one of the two reasons above that will be the difference between those teams.