Humans regulate inter-group conflict through parochial altruism; they self-sacrifice to contribute to in-group welfare and to aggress against competing out-groups. This article exams whether or not parochial altruism makes or breaks an organisation in terms of it achieving its longer term success..

What Does This Mean For Your Business? 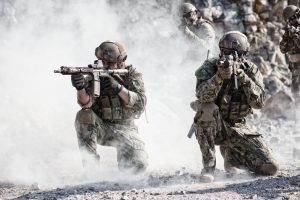 Trust is needed in any team

Oxytocin gives us our feeling of friendship and trust towards those around us, where dopamine gives a short term feeling of satisfaction when we achieve something, oxytocin is released into our brain as a reward we feel when we are in a longer term, friendly and trusted relationship. Dopamine might have helped us find a partner, oxytocin lets us keep them. In business that means that it is essential that we build strong teams, in an environment that allows us time to develop the trust we need to really work well together and to contribute to the ongoing “safe environment” that we all crave as human beings.

Parochial Altruism in business can be a good or a bad thing but before I explain why, let me clarify the term.

Parochial – a preference for favouring the members of ones ethnic, racial or language group. In an organisation, it is the “language” group that I want to focus on. There are two types of language in any organisation; 1) The organisational language born from a strong culture, where every person in the organisation talks this language, it is ingrained into all communication and shows itself in the actions of the people. 2) Departmental language which grows in the absence of a strong organisational language, for example, sales department talks in their sales lingo, marketing talk in their lingo, operations talk in their lingo, etc, all very foreign to each other.

Altruism – benefiting fellow group members at a cost to oneself.

People in this type of organisation see their in-group as the entire organisation and the out-groups where potential threats may come from are always external of that organisation. In this scenario any defensive forms of out-group aggression are directed outwith the organisation every time to benefit the organisation as a whole. For example if a big player in a different market space decides to muscle in on an organisations core market space, everyone will step up to protect their group. The leadership team will come up with the strategy but everyone will do what they can to make those strategies happen and stop the new arrival from eating up market share. If that means fundamental change to how they operate then everyone will embrace that change, confident in their leaders to help them get through it. Everyone talking the same language is on the same page.

In an organisation where the culture is not strong and the leadership team are not cohesive, do not understand the concept of what their number one team is and adopt their own language major problems happen. The natural instinct of parochial altruism ends up working against the organisation as a whole in preference for the individual departments where people default to feeling safe talking their own language and looking after those who talk that language. When the leadership team is not healthy they will turn up to their meetings trying to push their own departments agendas, no matter what hurdle has been tabled for them to work through they will always bring it back to “how will this benefit my people?” stopping any real progress from happening. It is here that office politics are born, it is here that dysfunctional organisations are born and it is here where many organisations fail completely.

If we were using our example regarding a new player entering the market in this type of organisation, firstly it would be unlikely that the leadership team could make a decision in a reasonable time frame because that decision would likely impact one or more of the departments in a negative way and they would never buy into that! Even if a decision was made, due to the multiple groups in the organisation, if there was nothing immediately in it for each of the departments the initiatives around that decision would never get off the ground, why because the departments would do whatever they could to protect themselves. If the company started losing market share to the new arrival, marketing or sales would get thrown under the bus by the other departments to deflect attention and scrutiny on themselves and that’s where defensive form of out-group aggression at best seriously inhibits or at worse destroys an organisation.

As humans we are wired this way to survive, as a leader, you need to recognise this and do what every great leader has ever done since the dawn of time, create that safe environment for your work tribe and then leverage our natural instincts to not just survive but to thrive.