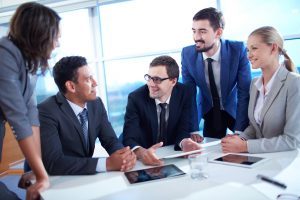 Cohesive Executive Team has to be the goal

From what I have observed over the years working in and alongside businesses large enough to have a management or executive team is that almost all hire for secondary roles not the primary role, let me explain.

If an organisation needs a new Sales Manager it will go to the marketplace and find a great individual with proven sales management experience to fill the role, if done right they may even make sure that person is also a cultural fit and everyone feels good about the new hire. This of course is the process for all the senior management positions.

Once they are on board they have their executive group (the number one team) meeting, what happens, each member of the group comes with (what they think is their primary role e.g. Sales Manager) hat on and sits around the table. It wont matter what topic is being discussed each member of the group will be thinking “how does this impact my team?” or worse “I’m not doing that, that has nothing to do with my team” and so little fiefdoms start to emerge, each leader in the room positions themselves to protect their own teams, agree only to initiatives that benefit their own teams and in worst case scenarios get hostile towards others in the room to protect their teams. This is where organisational politics is born, an organisation with a group of leaders at the top all protecting their own agendas.

Wouldn’t business be so much better if the executive group were hired for their primary role in the number one team and do what an executive team should do, drive the company forward and when they are not doing that they can then default to their secondary role of leading the sales team or the finance team, etc. Then we would see one cohesive team (rather than a group of individual leaders) at the top with that cohesiveness being repeated throughout the organisation having everyone on the same page working towards one agenda to achieve clearly defined outcomes.

5 Must Do’s To Get Your Number One Team